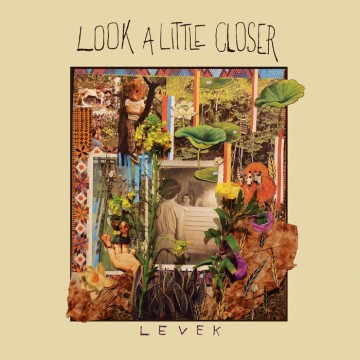 Frontman and songwriter David Levesque started Levek with acapella covers, giving those songs, and eventually his originals, what has been called his signature Mickey Mouse tribal sound. Before listening to Levesque’s music I had no idea what that sound would be and after listening to this debut album I still have no idea what that sound is supposed to be. “French Lessons” and “Solemn Feeling Forever Feeling” have Electro-synth sounds and “Can’t Buy This Love” uses a vocoder voice effect. A couple of songs have tribal sounding recorder or flute parts. Maybe that’s the sound?

The opening track “Black Mold Grow” works even though it could be three different songs, starting with a Beach Boys vibe, building to Psychedelic Disco and ending with an Ambient bubbling brook. “With A Slow Burn” is a beautiful Crosby, Stills and Nash influenced song with a recurring and interesting sloshy, galloping beat. Several other tracks, including “Canterbury Bell,” remind of early Simon and Garfunkel. The warm, fuzzy feeling is lost in the mishmash of instruments and styles when Levek incorporates Lounge, Jazz, Funk and ’60s and ’70s Pop in addition to other aforementioned sounds.

Look A Little Closer is supposed to tell a “tale of a young girl’s struggle with mental illness,” but the album sounds more like a collection of songs from several different movie soundtracks. Overall the record lacks cohesion and ends up being odd, Psychedelic, Easy Listening background music.