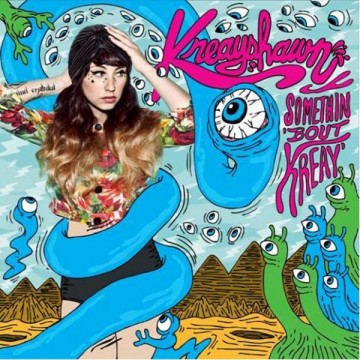 This album is Kreay, like swag pumping out of her ovaries. Somethin’ Bout Kreay is catchy, gimmicky, full of attitude and fun to sing along with. She’s known best for her 39-million plus viewed video posted last year, “Gucci Gucci,” which stirred up a lot of controversy and opinionated posts. “Gucci Gucci,” which feels old and overplayed now, is included on her debut album. This Oakland-born artist has created an identity for herself with just that video alone, she’s still no Pop star and doesn’t need to be – what she’s created is distinct and entirely her own. Dropping this album last-year when her name was still fresh in everyone’s mind would have given it more attention, but with 4,000 copies sold in the first week, she’s not doing too bad for herself… for Kreayshawn.

It’s obvious on this album that Kreayshawn isn’t a real rapper, nor can she rap. She’s really still just a kid with an attitude, a microphone and access to other artists and a studio. “Blasé Blasé,” sounded like “Gucci Gucci.” Then again so does almost every song on the album in the sense that all she talks about is swag, her haters and how she’s not a “basic bitch,” like every other girl. “K234ys0nixz” was probably the worst song on the album and shows how self-absorbed she is. Not to say Kreayshawn isn’t talented at all, her fashion or ‘swag’ is great and over the top, her directing for her music videos is decent and her attitude is awesome.