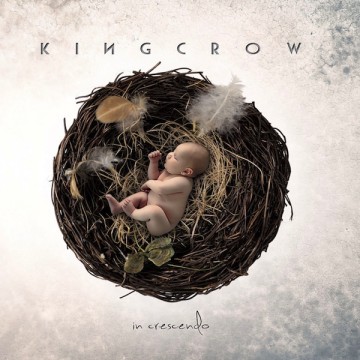 Kingcrow is the sound of the God Particle creating matter. They are an absolutely incredible Progressive Metal band hailing from Italy who seamlessly combine rich flavorful atmospheres with brilliantly intricate musicianship. Their tracks are masterfully crafted in a way that showcases their talent without relying on “look-what-I-can-do” solos as utilized by the “bigger” name bands in the Prog-metal scene. A solid composition is not a three-minute solo with a bridge in the middle, followed by another three minute solo, with a fade-out wrapping it up. Kingcrow have a very mature approach to their craft but it’s not so mature as to be comparable to a bowl of boiled fruit. Their tracks are full of excitement and tasteful variation without changing so much that they become forgettable. The production quality on this full length has such crystalline clarity that it would leave the people at Brita dumbfounded.

The music ebbs and flows flawlessly. It’s honest and full of heartfelt integrity. It’s obvious that this album has come from the most sincere of places; to be completely honest, the tracks are so mesmerizing and beautiful that at certain times I get a little misty eyed. While listening to “In Crescendo” I hear elements of Genesis, Devin Townsend, Opeth, In Mourning, Katatonia, King Crimson and Queensryche, peppered with electronic elements that are also similarly and brilliantly utilized by Animals As Leaders. There really is something on here for fans of old and new Prog-metal. I really can’t say enough good things about Kingcrow. Buy this album immediately, it’s the most pleasurable listening experience I have had so far this year. In Crescendo is exquisite and damn near perfect.