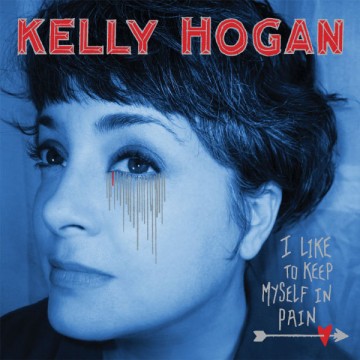 Kelly Hogan
I Like to Keep Myself in Pain
ANTI- Records

Kelly Hogan is a great talent with great pipes, great sass, and great friends and collaborators. (You might know her from her collaborations with Alejandro Escovedo and Jon Langford.) In the past twenty years she’s only released four albums, and her last full-length platter dropped in 2001. While she’s not exactly prolific, this just makes the release of her latest album, I Like to Keep Myself in Pain, more of an event.

As anyone who’s seen Hogan perform with Neko Case can attest, her greatest strengths lie in her live performances. This album plays to her undeniable power as a live performer. I Like to Keep Myself in Pain sounds as though it was recorded live in the studio, complete with false starts and barely-off-mic instrument count-offs. Hogan sounds as though she’s in her element. The casual-sounding, late-night-at-the-bar mood allows her to really cut loose and wail.

The you-are-there quality in the production and Hogan’s honeyed wail give the album a sense of unity. Since the material was culled from the works of several well-respected songwriters, this album might have had a more scattered quality, but the first four or five songs in particular interlock so well that it’s nearly impossible to imagine they weren’t all written by the same songwriter. Hogan invests such passion in Indie-iconic songs (like Stephin Merritt’s “Plant White Roses”) they could fool an unwitting listener into thinking they’re originals.

Performances by a band comprised of renowned session musicians round out an exemplary album. Fans of Stax Records may be interested to learn that “Green Onions” songwriter Booker T. Jones tickles the keys on this album.

“I want to hear your voice comin’ out of my radio,” Hogan sings on “Golden.” Her fans have long felt this way towards the underdog vocalist. I Like to Keep Myself in Pain would be a worthy addition to any playlist, whether it’s broadcast or merely on your personal listening device of choice.

RELATED ARTICLES
album reviewsi like to keep myself in pain
7.0