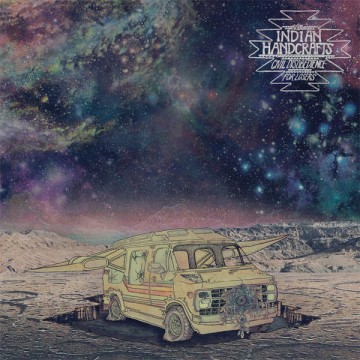 When listening to Civil Disobedience For Losers, one might think that this much sound could only come from a full five-piece band. But, then you realize that Indian Handcrafts is a duo. The Barrie, Ontario-based band knows how to bring the noise and the attitude needed to make it in the Punk/Metal scene, and they’re bringing it with fully distorted power chords, thrashing drums, and screams worthy of provoking disobedience.

Behind the cool nebula album cover of Civil Disobedience For Losers is Brandyn James Aiken on drums and vocals, and Daniel Brandon Allen on guitars and vocals as well.

Side note: Allen recorded this album with a broken hand (queue the shooting star that says “The more you know”).

The opening track, “Bruce Lee,” is getting a lot of press from some big names, and starts off with a gong and continues into a rebellious Punk anthem full of powerful drumming, distorted guitar, and singing in unison. Both Aiken and Allen have distinct voices, which you could either be fond of, or turned-off by. However, their yelps fit in quite well with their sound. Civil Disobedience For Losers is a riff-heavy album with “Centauri Teenage Riot” serving as the prime example of Rock-n-Roll-rooted riffs. The duo slows it down in the sluggish instrumental track “Truck Mouth” which eerily creeps its way through your speakers as you give it a listen.

Does this album make me want to bring out my plaid skinny pants and Doc Martens and go play mailbox baseball? Yes. But the vocals are still not all there for me on this album. Nonetheless, these tuned-down tunes come at you heavy.