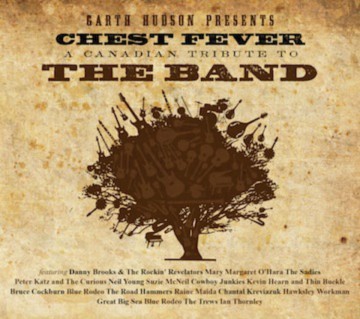 Garth Hudson has grouped an all-star cast of Canadian musicians to build Chest Fever – A Canadian Tribute to The Band. Ultimately this release will leave a better taste in your mouth than Levon Helm’s failed ’90s reunion that saw Helm as the only original member to paste his name onto The Band’s Jericho (1993). At the Robbie Robertson questioned what the point of such an album was (after all, Richard Manuel had taken his own life in ’86, while Rick Danko and Robertson both had bustling solo careers and were not willing to help with the record). But even Robertson and Danko (who passed on in ’99) could have no qualms with Hudson’s Chest Fever.

The best part of Chest Fever is easily the song selections. Though Ian Thornley (of Big Wreck fame) concludes the compilation with “Chest Fever” – after the standard Garth Hudson intro, “Genetic Method (Anew)” – most of the track selections dig a little deeper from The Band’s stupendous back catalogue. Neil Young drops by (backed by The Sadies) to do a stellar version of “This Wheel’s On Fire” before The Sadies tackle “The Shape I’m In” on their own (Dallas Good’s vocals lending perfectly to strained sentiments like “Back on the streets for the crime of having nowhere to go”). Hawksley Workman kicks up the Rock ‘n’ Roll quotient on “I Must Love You Too Much,” something that this compilation could have used a bit more of. The Trews also pick up the pace with “Move To Japan,” an odd selection for the East coasters considering it appears on Jericho, but they nail it.

Unfortunately not all of the cuts hit their mark. Chantal Kreviazuk brings her powerful voice to “Tears of Rage,” but falls short of capturing Richard Manuel’s heartbreaking melancholy. Mr. Raine Kreviazuk plays with “The Moon Struck One,” and unless you absolutely love Our Lady Peace (which makes no sense to me), then take a pass here. Of course, it’s not easy to just play a song by The Band – after all, Robertson is one of the greatest Rock guitarists of all time and Hudson is an accomplished and classically trained musician. Some artists were content to pay homage by merely showing off a splendid moment of a cut (Peter Katz And The Curious spin “Acadian Driftwood” by singing a few parts in French). And what would a Canadian compilation be without Canuck staples Cowboy Junkies (“Clothes Line Saga”) and Blue Rodeo (“King Harvest”)? Both bands do excellent jobs – because that’s the only kind of job they know how to do.

At its lowest point Chest Fever will make you re-watch The Last Waltz for the thousandth time, at its high point this is a bit of Canadiana that must be heard.