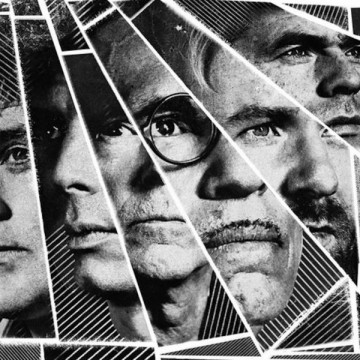 Question: Could this album be a “Them Crooked Vultures” type collaborative moment that catches lightning in a bottle?

FFS is an interesting rock supergroup formed by Scottish rock group Franz Ferdinand and American rock band Sparks. These bands have actually worked together before over the last ten years or so, and the fruits of their labour are finally here for the musical masses to discover and digest. With their creative, acronymic band name aside (sarcasm duly noted), one can only hope the 12 songs on the album show more thought and inventiveness.

The album opens with a simple piano intro in “Johnny Delusional,” signaling Alex Kapranos to slowly croon his lyrics, soon to be joined by Russell Mael’s falsetto. After a nice hard guitar riff begins with an upbeat drumming tempo, the vocal harmonization calls up images of some ‘70s glam rock songs. A great start to the album.

The second song “Call Girl” has an interesting bouncy keyboard riff while the haunting word “call” is only repeated 20 times…I think we get the point: the character wants her to call. The vocals at 1:36 where he pleads, “It’s me, it’s me, it’s me who always wants to meet,” are a nice touch. A fantastic subtext of this song is that he’s “waiting by the loading dock” for her, he’s hocked all his stuff and even “gave up blow and Adderall” so he could spend money on her, and he’s wondering why SHE doesn’t call? Well, the clue is in the title of the song: she’s a CALL GIRL. Poor sap. Brilliant.

The refrain in “Dictator’s Son” sings like a creepy children’s lullaby, and the blaring horns are a bit too much. Around the 2:40 mark, the bridge comes out of nowhere, disjointing the song. However, the vocals are interesting as they really hit some high falsetto notes.

The fourth track, “Little Guy from the Suburbs,” plays out like a funeral procession, and is just as miserable. Not much going on there.

“Police Encounters” has an epic opening with the drums. The beat picks up with the vocals seeming to gain more traction as the song progresses. Special note goes to the lyrics:

The sixth track, “Save Me from Myself,” again has the sound of an epic, glam rock song. But wait, didn’t we cover that in track one? Meh. The bridge at 1:55 was nice, yet a raging guitar solo may have given it longer legs to stand on.

“So Desu Ne” is an instrumentally quirky track with the quirky imagery in the lyrics. Odd.

It’s unclear what they were trying to do with “The Man Without a Tan,” vocally and instrumentally; it’s got odd parts here and there, like the orchestral soundbite that comes out of nowhere at the 54-second mark.

“Collaborations Don’t Work” has some nice harmonization and instrumentals. The orchestral instruments go full out (as their use has been slowly building up to this point). Too bad the lyrics let down the song with its repetitive “collaborations don’t work” mantra, ad nauseam. At the four-minute mark it plays out like a Phantom of the Opera scene with an actor soliloquizing to an audience. The tone suddenly changes at 4:44, as the song turns to the bass/piano/acoustic guitar combo, which morphs the song into a Supergrass’ “What Went Wrong (In Your Head)”-like melody. This song IS messing with my head. It’s all over the place like “Revolution 9.” The title of the song again gives us a clue; with all this distracting stuff in the song, is it the POINT that it doesn’t work, that these collaborations within the song don’t work? If so, that’s a pretty shitty joke to play on the listener, FSS.

We finally come to “Piss Off,” and the familiar high notes of Kapranos are still reverberating with the same heavy guitar. Ironically, the lyrics “get to the point” echo my thoughts exactly. This isn’t a strong track to end with.

So, to answer the original question: this ain’t no Them Crooked Vultures, but the powerful union of FFS can definitely hold their own with a distinct sound to whet the palette of music listeners.

Insert pretentious stuff about me here. I was born at a very young age. I am pretty, funny... without the comma. Easily distracte
RELATED ARTICLES
album reviews
7.0