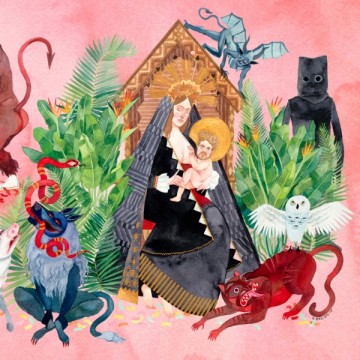 I Love You Honeybear is a well thought out album. The slow romantic music, accompanied by realistic lyrics of relationships and the American education system, makes for an interesting album.

A year after recording a demo, Joshua Tillman, also known as Father John Misty, started his career as a singer by opening for Damien Juardo. Father Misty would hand out CDs of his songs at Juardo’s shows, which later became I Will Return. His first album to be properly distributed was Minor Works in 2006. It wasn’t until 2012 that Tillman released Fear Fun under the name Father John Misty.

I Love You Honeybear isn’t your average indie album. The music sounds like that from Elton John or John Lennon post Beatles, however, when you listen to the lyrics, the album is actually a satirical and sarcastic collection of viewpoints and stories. With lyrics like, “Maybe love is just an economy based on resource scarcity, but what I fail to see is what that’s got to do with you and me.” and “Lift up your wedding dress someone was probably murdered in,” are both funny and smart. There are very few clichés, which makes it rather refreshing to listen to and more realistic than the average love song.

Music and writing have always been a big part of Sabrina's life. She would "borrow" her dad's rock and metal CDs from his collection and listen to them while going through the art books. Although she doesn't write angsty poetry anymore, she does have a Bachelor's Degree in Journalism which she uses to pursue a creative career path. When she's not writing, Sabrina can be found juggling a coffee cup and DSLR or Instagramming her food.
RELATED ARTICLES
album reviewsfather john mistyi love you honeybear
9.0