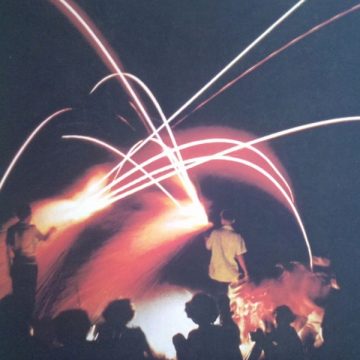 Like the ever-expanding universe, Alex Feld (aka Expensive Looks) knows music and creativity have no boundaries. His debut LP, Dark Matters, encompasses nine tracks of experimental Electro-house, though it’s difficult to describe the album in so few genres. Dark Matters blends the many influences of this Chicago-born self-taught DJ, including Chicago House, Disco, Motown, and ‘90s dance.

The first track feels like a perfect introductory piece; “Your Dreams Our Week” features looped Electro beats graciously interrupted by marching synthesized beats as Feld’s creativity pours out like waves. Each track moves elegantly into the other. “Nothing More” may remind you a bit of MGMT with Feld’s vocals shouting from a distance and the dreamy keys. “Trancewave,” with its danceable beats and high-pitched vocals, echoes Memory Tapes’ Seek Magic (2009). Psychedelic ‘80s elements are featured in “Moving Visions,” reminiscent of New  Order.

Describing this album is one thing, but experiencing it is another. Dark Matters takes you on a trip through space, and for Feld being a “space nut,” he accomplishes this beautifully. It is an intriguing and experimental Electro-house album, and regardless of the ‘dark’ title, it’s rather exhilarating. From the psychedelic House, to almost soulful Electronica, you’ll find links between genres you’ve never thought of, all while experiencing waves of euphoria as you float through the dark matter between the stars.

Raquel likes music a lot, especially indie music. This sometimes results in her writing about it. When she's not doing that, she is working at a tech startup in Vancouver. And when she's not doing that she's in school, learning about human resources. And in her spare time she sips wine while watching the west coast sunset.
RELATED ARTICLES
album reviews
9.0