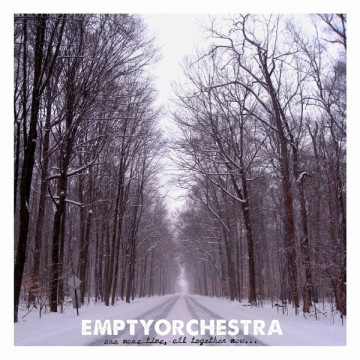 When I listen to Empty Orchestra’s music I can’t help but picture its niche in an Irish-themed pub, among all of the other Pop-Rock-songs-with-an-edge that are played in pubs, but only ever lie in the periphery of my audible range because I’m too busy drinking and socializing to care what’s streaming out from the speakers. You know the type of songs I’m talking about, the one’s that serve as background noise and can’t always be distinguished from all the other noise in a pub. Sure there may be some that stand out, but the majority fades away into the permeating collective hum. In the setting of a pub (or maybe even a party) these songs could help with ambience and can probably encourage people’s desire to drink, but listening to it outside of the right setting (i.e. while hunched over your computer and listening to the music intently) can be a really mind-numbing experience.

Empty Orchestra’s new album, One More Time All Together Now, is like a soundtrack of songs you hear but don’t really listen to. The band’s collection of passive-aggressive Pop-Rock ballads lose their appeal by the third track and rarely piqued my interest after that point. With the exception of the tracks “Broken Record,” “The Ballad of Bulls Run,” and “Empire State Building” none of the songs grab you by the collar and demand your attention. Tracks like “You Should See the Other Guy” and “Black and Blue” fall into the category of those over-bloated, forgettable Pop-Rock songs, and the ubiquitous Country sensibilities of tracks like “A Wide Spot in the Road” is less than riveting – a sentiment that can be applied to the entire album.