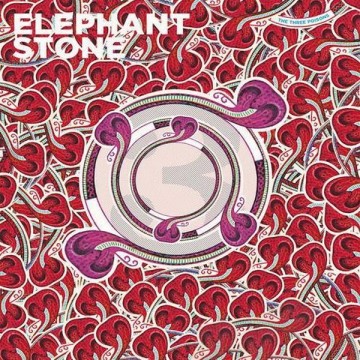 Elephant Stone’s new album The Three Poisons, continues to be a musical fusion of East meets West, but above all else, it is a beautiful blending of artistic maturity and discovery. Unlike their last release, which was recorded live, this is a more mature thematic endeavour.

Having the opportunity to experiment in the studio, is perhaps the key reason why this recording might be one of the best albums of 2014. I do not say this lightly. In a landscape which suffocates the listener with a plethora of unfiltered noise, streaming mindlessly from many platforms, there is nothing like The Three Poisons.

Elephant Stone are a hard working band. Literally! Although they are pursuing their dream of making a sustainable living from their music, at the moment they are working full time jobs, recording, and touring. One wonders whether this has seeped into their musical consciousness, making the album refreshing and timely.

The Three Poisons was inspired by the Buddhist teaching which lists ignorance, attachment, and aversion as the primary causes that keep human beings trapped in unhappiness. Ignorance is the root poison, leading to the other two. This is a noticeable departure from their previous self titled effort. For the first time they have a collection of songs that is unified by a common theme. This thematic approach is explored in each individual track. Most notable is the song Knock You From Your Mountain. This Dylanesque protest song, fused with Eastern rhythm and a touch of Pink Floyd, comments on ignorance of those fighting wars, and those of us who watch the news, yet blissfully remain ignorant bystanders.

There are many other gems on the album that require their proper turn and point out a deep musical chemistry and intuitiveness between Gavin and Rishi. The western electric guitar and the eastern sitar speak with a single tone and purpose. Throughout the album one has the surreal impression as though their instruments had the capability of finishing each other’s sentences.

The band as a whole needs to be congratulated for contributing such a recording to our rich Canadian landscape. A tour is already planned, but compose your excitement and give this The Three Poisons a good listen

Grzegorz Kieszkowski originally hails from Bydgoszcz, Poland. After his father was released from prison in 1984, for his involvement with the Solidarity movement, Greg and his family escaped to Canada in 1985. He makes Cobourg his home, along with his wife and two small children. Greg is a graduate of York University, with a double major in English and Philosophy. Music has always been in his blood, and although his tastes have matured, he will always have a soft spot for the Metal days of the late 1980’s. He is a full time English teacher and a professional photographer. Part of the allure of writing is the possibility of conversation, and he would love to hear your comments and opinions. Please feel free to visit his personal website - grzegorzkieszkowski.com.
RELATED ARTICLES
album reviewselephant stone
8.0