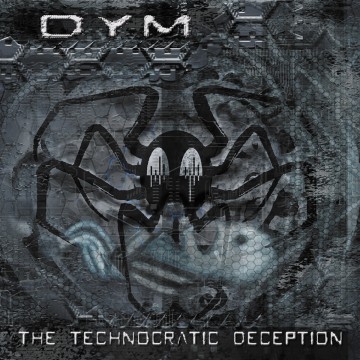 I was confused by the choice of opener, “The End,” which is a weaker track. It’s fun and clubby, but drags in the breakdowns and milks the hook a little too much. The remix version, “The End (CYGNOSTIC Remix),” is much harder-hitting and tighter.

Fortunately the rest of the album fared better, starting with the club stomper second track, “Let Your Blood Run Dry,” a favorite of mine from the We Are Legion Too compilation.

DYM mix things up with “Bring Me Down,” featuring spoken word over a sludgy glitched-out background of doom. I also liked the glitchy Jungle loops and vocoder combinations on “Rapture” and “Tumor Type 2,” plus the collaboration with Chiasm, “What If,” another glitchy cut that has an open and airy feeling contrasting with the heavy beats and synths thanks to Chiasm’s sweet-sounding clear voice.

If I had one quibble, it would be a common quibble with a lot club Industrial these days: People, kill that metallic sounding fake string/brass patch! The worst offender on this album was “NWO” where it seemed that was the only synth sound on there, which sounds a little dated already.

All in all, The Technocratic Deception is a pretty solid club Industrial album, and you’ll probably be hearing a lot of it at your local Industrial night.