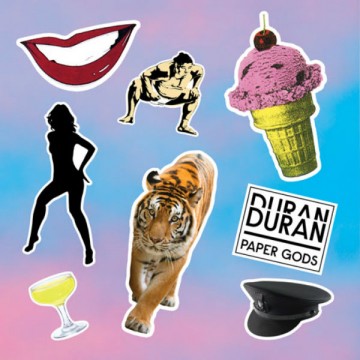 The Fab Five, as they were known when they ruled the airwaves through the mid- 1980s, has dwindled in number to four, but the quality of their music has not similarly waned.  The opening (and title) track follows the band’s formula of an electronic sound with an upbeat but very recognizable feel.  Simon Le Bon’s vocals eliminate any doubt as to whether or not you’re listening to Duran Duran, and their music’s signature style is at once familiar.

The heavy synthesizers on the remainder of the tracks, put forth by Warner Bros., call up memories of early Depeche Mode. The synth hooks and overall sound are definitely reminiscent of the band’s ‘80s heyday, but the updates make it relevant for modern audiences. Don’t expect “Save a Prayer” or “Girls on Film,” but this is absolutely an admirable effort.  Having lost a member (Andy Taylor, one of the three unrelated Taylor boys in the band) in the mid-1980s (upon his signing a solo recording contract in Los Angeles, although he subsequently rejoined and left the Duran Duran roster a few times), Le Bon carries on along with Nick Rhodes on keys,  John Taylor on bass, and Roger Taylor on drums. Aided by a number of guest contributors, including John Frusciante, a former guitarist of the Red Hot Chili Peppers; Canadian singer and musician Kiesza; and several others, the sound stays true to their signature but adds an air of seriousness. The electronic beat keeps them from falling into the “dark” music category.

The catchiest track was the first, “Paper Gods,” which features the vocals of Ben “Mr.” Hudson, a Birmingham-based producer, songwriter, and musician who spent most of 2014 writing and producing the album alongside Le Bon.  Lyrics are about the impact of all the superficiality of society the obsessive relationship with money so many of us are engaged in.

Another highlight was “What Are the Chances,” which includes Frusciante on guitar and London-based guitarist and singer-songwriter Dom Brown, who has been collaborating with Duran Duran since 2004, when he stood in for guitarist Andy Taylor. This song is one of the slowed-down ballads of the album that illustrate why so many teens and pre-teens swooned over the Durans in the ‘80s.

Overall, I give it a thumbs-up.  I certainly appreciated some tracks more than others, but wouldn’t call any of them bad.  It was a good listen, a trip back to the days of my youth drooling over these guys on my record covers and school folders, and I enjoyed every minute.

Kathy Nichols, from the land of cheese and beer, has been writing off and on since elementary school. Her passions include hugging trees and trying to make a positive difference in the world, to which end she completed a degree in Mass Communications coupled with Environmental Science. Kathy appreciates all types of music, mainly industrial and punk and the like (especially bands who use their fame and fortune to try to make social or political statements), but with a little bit of Beastie Boys and Billie Holiday thrown in to switch things up a bit. She is the owner and CEO of www.industrialstrengthpublicity.com and enjoys long walks on the beach and (skinny) puppies.
RELATED ARTICLES
album reviewsduran duranpaper gods
9.0