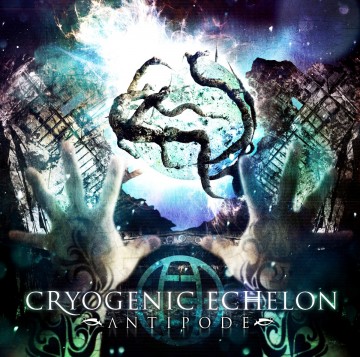 Australian dark dancefloor act Cryogenic Echelon (aka Gerry Hawkins and a huge guest list) deliver a wide range of Electronic styles on their new album, Antipode. Stomping rivetheads and bassbin huggers alike will certainly find something to get them moving with the 21 tracks that make up the generous 100+ minutes of this release (including six remixes and a cover of “Hymn of the Fayth” from the beloved Final Fantasy X PS2 game).

Styles range from operatic Drum ‘n’ Bass to glitchy Trance with countless hybrids in-between, most of which are very effective. I say “most” because there are a few tracks that may incorporate structures and/or sounds that feel a bit too familiar (if not completely played out) depending on your preferences and tolerance for “that Trance lead” and other trademark Dance elements. For example, “I’m Famous” is a bleepy Dubstep track with a spoken vocal hook. It’s not Dubstep-by-numbers, but it’s not terribly unfamiliar either. “This May Be Fun” follows and is one of the album’s more stompy tracks but manages to run its main vocal sample into the ground very quickly and doesn’t let up. It makes you wonder if it’s 1987 again and the band could only fit one or two clips in its sampler.

Fortunately, there are plenty of highlights here. “We Are Many” is an early track that begins with dreamy female vocals and Trance chords but doesn’t waste any time in laying down a nice, fat, glitchy beat. By contrast, the haunting “Pieces of Eden” lowers the BPM for a few minutes of moody instrumental synth reverb heaven. But don’t worry – when there is a rare moment of mellow, it’s typically followed up by something much harder. In a best-case scenario, “You’re Still Lonely” starts off with pleading female vocals and an almost Dub-like beat, but still manages to pull out all the stops a few seconds later with grinding bass and twitchy stabs.

Some tracks – especially the remixes – evoke styles similar to Deepsky, Bassnectar, and even chillout thanks to Blast Radius’ mix of “Demigod” (the obvious star track of the album). With so much crossover going on, Antipode has the potential to not only entertain the hell out of a lot of people, but to expose fans of Dance music to styles and sounds they may not have given a fair shake otherwise. There may be a few issues here and there (and may even be pluses depending on what’s in your collection), but the positives far outweigh the potential negatives, making Antipode a must-listen for Dance fans of all types.