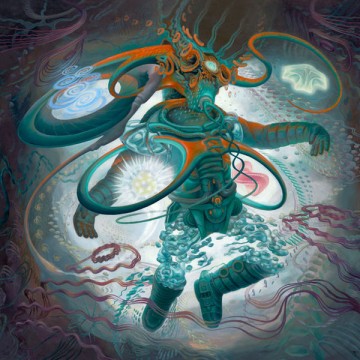 It is with the release of their sixth studio album that Coheed and Cambria frontman Claudio Sanchez reveals the world of his imagination and artistic work through music. The Afterman: Ascension is the first of a two-part album that the Progressive Rock band is releasing, called The Afterman.

The Afterman: Ascension is essentially a concept album that is intended to be listened to in chronological order. It is based on Sanchez’s comic book series called The Amory Wars. The Afterman follows the character Sirius Amory as he sets to explore the Keywork, the 78 worlds in which The Amory Wars is set. Amory later finds out that there is an energy source that holds the Keywork together – an afterlife for departed souls.

The album opens with “The Hollow,” a soft piano ballad that is eerily joined in by whispering voices. “Key Entity Extraction I: Domino the Destitute” follows as the first heavy song off the album. Here we hear much of Coheed and Cambria’s old sound, though their heavier tracks don’t tend to vary in style. Sanchez joins the guitar riff with his high-pitched voice hitting notes perfectly, making the chorus the strongest part of the song. His vocals are spot-on in the whole album, especially in “Mothers of Men,” where we hear his distinctive wail. “The Afterman” is a softer song about a girl searching for her Afterman. The Afterman: Ascension is balanced with soft and heavy songs, which adds dynamics to the story of Amory. “Goodnight, Fair Lady” carries the same sound and features newest member Zach Cooper’s predominant bass lines. “Key Entity Extraction II: Holly Wood the Cracked” is full of heavily distorted guitars and bass, and I couldn’t help but sense some Nu-Metal influences.

With an artistic vision in mind, Coheed and Cambria has much more to explore lyrically and instrumentally. The Afterman albums were produced by Coheed and Cambria themselves, along with producers Michael Birnbaum and Chris Bittner.

The second part album, The Afterman: Descension, is set to be released Feb. 5, 2013.

The Spill Magazine is a Toronto-based online publication dedicated to covering the independent music scene with a strong focus on our thriving hometown talent. Our writers bring you up-to-date news, in-depth features on musicians and reviews for the latest CD releases. We also travel to the front lines for all local festivals including Canadian Music Week and North by Northeast. Don’t forget to check out our Facebook and Twitter pages for all daily Spill updates.
RELATED ARTICLES
album reviewscoheed And cambria
9.0