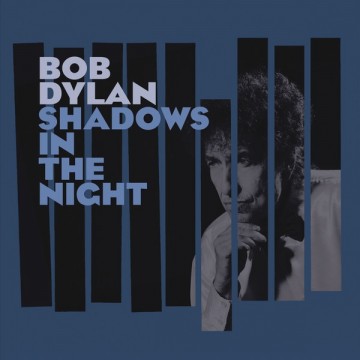 Shadows in the Night is Bob Dylan’s 36th studio album. It was released by Columbia Records on February 3, 2015 and contains 10 songs originally made famous by Frank Sinatra, though Dylan himself chose these songs in this arrangement for this album.

From the first song “I’m a Fool To Want You,” Dylan sets the tone for the entire set, evoking feelings of lost love, sadness, and melancholy made even more emotional by his gravelly (though less ragged than previously) tone and wistful tempo. For those that gave up trying to understand the Dylan of late, straining to make sense of mumbled lyrics, you should give him one last chance. His voice on this album evokes the Dylan we came to love way back when. Song after song, Dylan’s enunciation is clear as he sings each word with purposeful meaning. Dylan proves that at 73, he is still a singer – strong of voice and just as able to stay one step ahead of all who try to pigeonhole him or believe he’s nearing the end of what his voice can handle as ever.

The songs on this album are not his, yet they are. Having never heard Frank Sinatra sing any of the songs showcased onShadows in the Night, one wouldn’t think twice if told these songs come from Dylan’s own writing. He has made a career of pining for women he once loved, writing about some of them with biting lyrics ruing the day he met them, and regretting parts of his past. When a despondent man asks “What’ll I do with just a photograph to tell my troubles to?” in “What’ll I Do,” you easily see this as something Dylan would have written in a song fit for Blood on the Tracks.

Unlike the Dylan we have come to love, this album is short – 10 songs lasting fewer than 40 minutes played all the way through. An homage for sure to Frank Sinatra’s time, when albums were shorter and didn’t include those Dylan-esque songs that can last over 10 minutes. It would be easy to brush over this record and stick it in the tribute album category, but this is not that. Dylan is paying tribute to Sinatra by choosing these songs, but taking them and becoming one with them, making each one his own. In doing so, in a way only few can, the listener is drawn in, carefully listening to the story he spins for us, feeling as you imagine the man in each song felt as these times in his life were occurring. In the first notes of the first song your attention is called to the sharp difference between Dylan and Sinatra, as there is not the sweeping production Frank Sinatra used, but rather Dylan’s usual five-piece touring and studio band. For those of us who have literally followed Bob Dylan, you recognize the precision and mastery of Charlie Sexton on guitar. Making up the rest of the band is bassist Tony Garnier, guitarist Stu Kimball, percussionist George G. Receli and perhaps the most notable of all, the sound of Donny Herron on pedal steel guitar.

Esteemed and experienced are the members of the band. On this album their sound is raw, almost as if you were listening to them play at an intimate gathering of their closest friends. The production, or lack thereof, on this release also bolsters that feel, adding to the realism. Recorded live, listeners are drawn even closer as we pick up on paper rustling and the light catch of Dylan’s breath.

Worth exploring is the marketing route Dylan embarked upon for this album’s release. Personally, with over 25 years of professional background in marketing, I have to admit I honestly have not yet solidified my thoughts on this. Rather, I prefer to pose questions, both to myself to ponder and to you all, to crowdsource your thoughts. The premise began with Bob Dylan choosing 50,000 AARP members at random to send this album to, free of charge. The sole interview Dylan took the time to give went to AARP, rather than the obvious Rolling Stone. This begs a few questions:

As a lifetime Bob Dylan fan, I loved this album. I loved hearing Dylan SING and I will always love songs that tell a story. At the same time, this album evokes deep feelings of woe; the songs are slow and inherently sorrowful. I kept waiting for the next song to lift us up, to give us a short break from feeling all the feelings, the next “Like a Rolling Stone,” but that song never came. This is a heavy album.

Buy this CD. Seriously. If you’re still on the fence, download these three songs first: “I’m a Fool to Want You,” “That Lucky Old Sun,” “Some Enchanted Evening.” (THEN go buy the CD)

Lucy Rendler-Kaplan is a native Chicagoan, recently returning home after 10 years in Los Angeles. Having worked in field marketing for the past 17 years, Lucy recently left corporate America to work as a consultant. When not running, Lucy can most often be found out with her dog, watching an NFL game, or listening to live local music. Passionate about writing, Lucy enjoys writing about music in lieu of playing it.
RELATED ARTICLES
album reviewsbob dylan
9.0