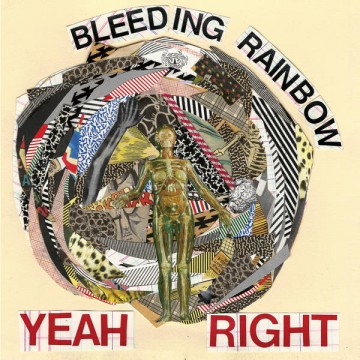 Hailing from Philadelphia, Indie Rock quartet Bleeding Rainbow have come up with a passable collection of songs that blend both ambient melodies with, at times, a psychedelic dream-like feel for their third disc, Yeah Right. The band, led by vocalist/bassist Sarah Everton and bassist Rob Garcia (who also handles vocals), along with new additions Al Creedon on lead guitar and drummer Greg Frantz, wanted to give themselves room for more creativity on this album. A few singles have been released including the grungy “Drift Away,” which is a decent track for which you can watch the video on YoutTube.

But it was another track “Get Lost” that commanded my attention as it encompassed that edgy sound that you expect from a Rock band. Oppositely, “Go Ahead” at first engulfs you with a warm sleepy feeling until you’re forced to wake up when it gets to the middle. Overall, apart from the aforementioned highlights, this disc doesn’t drag you in, though Everton’s pretty vocals compel you to listen.

With Yeah Right in stores now, and having just toured with A Place To Bury Strangers, watch for Bleeding Rainbow to tour on their own soon.