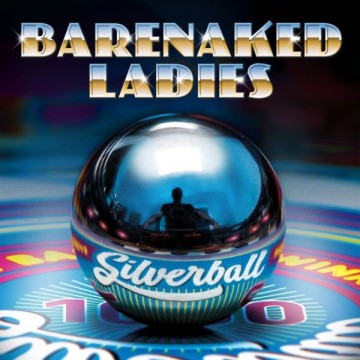 Watching the Barenaked Ladies spitting out albums consistently since 1992 (but no Junos since 2009) is like watching 19 kids and Counting while thinking, “when are they going to be done?” After listening to their latest release with original material, clearly the Ladies aren’t done making music just yet.

Upon first glance of the pinball machine album cover, one cannot help but soak in the retro feel as the Barenaked Ladies title is in a 1970’s Solid Gold-esque font, while a shadowy figure is reflected in the pinball. Apparently this cover was created to parallel lead singer Ed Robertson’s interest in pinball machines, as he started collecting them in 2010.  This musical project sits at a comfortable 13 tracks, with most of them being under 3 1/2 minutes; not too daunting a task to listen to.

With the band moving in a logical, forward progression in their last few albums without former lead singer Steven Page (and having more than enough time to gel and grow as a creative unit), you’d think the band’s sound would be more inventive. Long-time fans might get the impression this current lineup could benefit from another look at the direction of their musical pathway. There is a lack of diversity in the tracks, as they follow the similar formula of standard drum beats, synth, guitar, and piano, along with Robertson’s warbly rap-singing rhythms (although he does actually sing a lot more on these tracks). Credit must be given to the band’s vocal gamesmanship as Robertson and Hearn take turns with leads on some tracks. After listening to the album, it feels like some of these songs just sit there and stare at you, as you wait for more to happen. “Get Back Up” is a solid start to the album, albeit with slightly depressing opening lyrics, “I’m a little bit worse for wear, got a little bit more grey hair . . .” but does a quick 180 and turns into a nice pop song with positive lyrics. You might be thrown off by short piano dissident sound bites. “Here Before” gets you pumped with their “we will rock you” riff, as the heavy guitar slides in with Robertson “singing” his lyrics, which, at times, seems laborious in his higher register. The lyrics of “Matter of Time” have been interpreted on the interwebs as secretly being about former lead singer Page. “Duct Tape Heart” shows off a kickin’ instrumental intro and a solid song that caters to Robertson’s style of singing. He bats two for two on the next track with “Say What You Want” as his distinct vocal style shines through. He passes the torch to Kevin Hearn’s vocals in the playful “Passcode,” a “Lounge Act”-like song with Perry White on saxophone! Other notable tracks are “Hold My Hand” (nice instrumentals), “Narrow Streets,” (shoutout to Dundas and Queen!), “Piece of Cake” (ABBA-like intro, picks up around the 1:50 mark culminating in a great guitar solo), and “Toe to Toe” (a great ballad). The album title song is another laidback track that doesn’t differentiate from Silverball’s other songs and feels expected.

Silverball continues along a Barenaked Ladies path that embodies a safe, middle-of-the-range tempo album. For Barenaked Ladies virgins, it’s not a bad listen. But for long-time fans, this album isn’t shaking up any existing boundaries, and it doesn’t seem to have the high-energy, really biting, witty, humorous lyrics we’ve seen in their previous catalogue of albums. The current incarnation of the band hasn’t made a departure from their closeknit harmonies or pop song sensibilities but with the addition of their synth tendencies, there are still some solid songs on here to appease even their hardcore fans and music fans alike.

Insert pretentious stuff about me here. I was born at a very young age. I am pretty, funny... without the comma. Easily distracte
RELATED ARTICLES
album reviewsbarenaked ladies
6.0