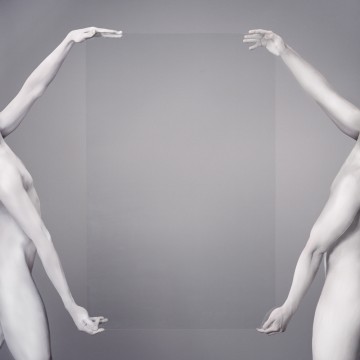 Autre Ne Veut, a.k.a. Brooklyn singer-soulwriter Arthur Ashin, opens his third full-length record with the challenging, atonal “On and On (Reprise).” The jarring introduction to Age of Transparency features Ashin’s vocals over a free-form jazz composition. At the 1:15 mark, the track breaks down before skittering into a series of false starts and aborted vocal crescendos . . . a record skipping . . Ashin’s voice strains for something greater, cracks. The tinkling piano and flutes usher this directionless six-minute track forward until it is again interrupted by a vocal meltdown, ultimately devolving into Ashin repeating “…like a child… like a child…” until finally, mercifully ending. “Panic Room” marks a welcome return to expectation, to crooning over beats built for head-nodding. With this high-contrast collision of form and function, Ashin has performed a nifty bit of misdirection. What Ashin intended with “On and On (Reprise)” cannot be wholly understood. Suggesting the opener is a bit of an exorcism, a purge of Autre Ne Veut’s more experimental tendencies might be underestimating how we experience music, or more specifically how we experience a full album, especially a follow-up to a record as critically successful and adored as Anxiety. Audiences expect an artist to do the same, just different with each subsequent release, like the musician existed in a stasis in the months and years between formal releases. This expectation allows no room for growth and evolution. To the album’s detriment, “On and On (Reprise)” doesn’t fully exorcise Ashin’s most experimental tendencies. The song destroys listener expectation before redrafting and reshaping this expectation. Age of Transparency’s complex arrangements and shattered musicality still feel familiar even if they’re constantly pushing, shifting, broadening our definition of Autre Ne Veut. Nothing else on Age of Transparency ever approaches the album’s jarring opening volley. That said, nothing on the album ultimately, wholly satisfies either. Age of Transparency knowingly sacrifices the pop sensibility that made Anxiety an immediately listenable slice of “bedroom R&B” (as the micro-genre has been dubbed). The album’s first single “World War Pt. 2” doesn’t bother with something as prosaic as a hook. Only “Panic Room” (which is actually some of Ashin’s strongest songwriting to date) and the album’s title track approach that former accessibility, teasing us with the warm fuzzies of Anxiety’s brilliant duo of “Play by Play” and “Counting.” The rest of the record riffs on themes established in “On and On (Reprise)” – glitchy electronics, improvisational jazz and Ashin’s pained, heartbroken voice uniting the many disparate elements on Age of Transparency into something approaching coherence… without ever quite getting there. Ashin’s complex vocal histrionics often overreach and become, in fits and spurts, somewhat self-parodying. A drunken lounge singer, cigarette dangling from his lips, wooing a beautiful but disinterested audience member with the blues oozing from his haggard soul. Exhaustive and complex, the songs on Age of Transparency disappear beneath the weight of Ashin’s vocals – the lyrics at the same time too manic and too repetitive. In the end, his emotional baggage becomes too much to bear; we’re left without the payoff, without the reward or the visceral pleasure for our extra effort.

James David Patrick has a B.A. in film studies from Emory University, an M.F.A in Creative Writing from the University of Southern Maine, and an honorary Ph.D. in bullshitting about everything else from the College of Two Pints. His fiction and non-fiction has appeared in PANK, Monkeybicycle, Squalorly, Specter Lit, and Bartleby Snopes among other wordy magazines. While he does not like to brag (much), he has interviewed Tom Hanks and is pretty sure you haven't. He bl-gs about music, movies, and nostalgia at thirtyhertzrumble.com and runs the James Bond Social Media Project at thejamesbondsocialmediaproject.com. James lives in Pittsburgh, PA.
RELATED ARTICLES
album reviews
7.0