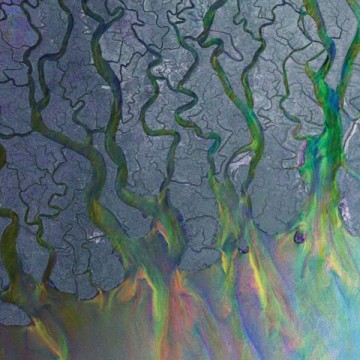 While it’s true that no band fails to leave a footprint in any specific genre, what Alt-J has done is come down squarely on the musical equivalent of the Four Corners quadripoint of the American southwest (the juncture of Colorado, New Mexico, Arizona and Utah), touching on Folk Music, Classical, Hip-hop, Trip-hop, Indie-Rock, and Synth without fully committing to any one identifiable pathway. The UK quartet defies buzzwords and music-writing clichés, thereby transcending the indie-rock genre into which they will surely, and unfairly, be lumped.

The result of their multi-sensibility craftsmanship is a record of pristine imperfection and unnerving musicality. Wave becomes 2012’s testament to the record as a whole work of art rather than a collection of 13 tracks with varying degrees of utility. Even after a handful of listens, one might still be hard pressed to identify where one track ends and another begins. Not because there aren’t clear breaks or obvious tempo shifts, but because Alt-J beckons the listener to come closer, so close in fact that the cracks in the album construction become obscured by a proximity to the material.

Perfection implies every sound fits squarely into place. Perfection is also best left for pop music where the simplicity of aspiration and over-production fosters an environment in which perfection becomes possible. Exquisite and rambling, Wave, rather, does not harness a sound or emotion and carry it to its logical and ultimate climax in some three-plus minutes. “Breezeblocks” and “Fitzpleasure” stand on their own, but without the introduction from “Tesselatte,” however, “Breezeblocks” is castrated, and without the quiet postscript of “(Interlude 3),” “Fitzpleasure” is rendered soulless.

There’s a rise and fall, an ebb and flow, between tracks that consistently abandons a beat or a riff or a synth track, prematurely. My word choice here is important. I suggest the end arrives prematurely, because, as experienced music listeners we have been trained to anticipate thematic conclusions. Often an artist will play on our emotions by extending or repeating refrains to the point of exhaustion. This is perhaps the aural equivalent of “the stare” in Spielbergian cinema. Alt-J, however, calls attention to a moment not by lingering, but by departure. Just as we’re settling into a moment, the time shifts, the track ends. The shifts are subtle and calculated but never artificial, never calling attention to the sequitur. And it’s not until the end of the album on the final two tracks (“Bloodflood” and “Taro”) that Wave allows us to stare, to finally linger,perhapsto realize that the tide we’ve been riding has finally, resolutely, reached shore.

James David Patrick has a B.A. in film studies from Emory University, an M.F.A in Creative Writing from the University of Southern Maine, and an honorary Ph.D. in bullshitting about everything else from the College of Two Pints. His fiction and non-fiction has appeared in PANK, Monkeybicycle, Squalorly, Specter Lit, and Bartleby Snopes among other wordy magazines. While he does not like to brag (much), he has interviewed Tom Hanks and is pretty sure you haven't. He bl-gs about music, movies, and nostalgia at thirtyhertzrumble.com and runs the James Bond Social Media Project at thejamesbondsocialmediaproject.com. James lives in Pittsburgh, PA.
RELATED ARTICLES
album reviewsalt-j
7.0