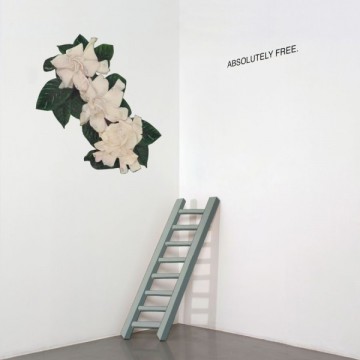 There is something magical about music that is both experimental and easy to dance to. Think Animal Collective, Dan Deacon, Caribou, or Doldrums. These are artists who know how to open your mind up but also make you shake your rump. Torontonian trio Absolutely Free (vocalist Matt King, Drummer Moshe Rozenberg, and Michael Claxton on bass and synth) know this recipe too, and on their self-titled album debut, they cook up eight groovy tracks that are healthy for your body and discerning musical palate.

Although the album came out in October last year, Absolutely Free has been performing their ethereal brand of music since 2011. Until the album release, fans have had few singles to tide them over: 2012’s “UFO/ Glass Tassel” and 2013’s “On The Beach/ Clothed Woman, Sitting.”

It has been well worth the wait. Produced on the Arts & Crafts label by Mike Haliechuk of Fucked Up, the album is a vibrant work with many layers of rhythms to chew on.

The artistic nature of the album is evident- from the album cover art (designed by King) and the title of the songs, such as “Spiral Jetty,” perhaps referring to the ever-changing earthwork sculpture in Utah, designed by Robert Smithson.

Like the Jetty, Absolutely Free’s songs move outwards in space and are not static but ever evolving.

Other songs, like “Earth II” and “Burred Lens” also evoke a spacy feeling, and combined with bleeps and bloops of the synthesizer, it makes the listener feel as though they are on board a UFO.

Their shows are pretty far out and varied as well. They’ve played classic TO venues like the Long Winter series at The Great Hall and the Opera House, but also less conventional ones like The Miles Nadal Jewish Community Centre where they played poolside, the Revue Cinema and where they scored a sci-fi film, and the TIFF Street Festival where they played live alongside Norman McLaren films.

Their next stop before their European tour is the warehouse-style Geary Lane.

If you’re looking for a good buzz – minus the side effects – next Friday Jan. 30, this is your ideal destination.

Native Quebecer and freelance writer Andrea Paré first began using music as a drug in her teen years to escape the drab experience of growing up in the suburbs. Now as a full grown adult and living in Toronto, she has a healthier addiction to discovering new musical artists and watching as much live and local music in her adopted city as she can.
RELATED ARTICLES
absolutely freealbum reviews
9.0