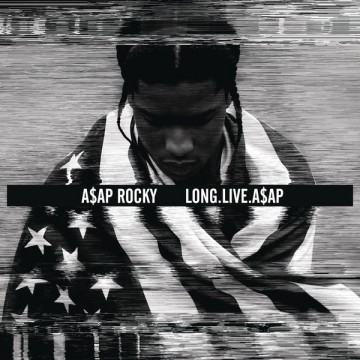 One of the hottest albums of the year, LONG.LIVE.A$AP is a hot grab and sets new standards. The title track roars, while A$AP chants, bragging with mesmerizing lyrics about how he went from being piss poor to having a “kitchen full of dishes,” and his success. The soft, relaxed singing with aggressive and angry background noise paints a picture for the mood of the album. “Goldie,” the second track, is one of the catchiest and will keep you listening with a head bobbing beat and with truthful lyrics about reality, “smooth puffin’ zigzags,” and “everybody playing the tough guy until shit pops off.” “Fashion Killa,” has more of an Electronic sound to it and a softer tone. The cut sounds like a dated Hip-Hop track, but the lyrics are beyond the standards. “F**kin’ Problems,” the eighth track on the record, also stands out as it has a different tone than the first half of the album. There’s more aggression, and more satisfaction too, in where A$AP has come and gone from. This album is like an angst-filled tantrum with its ups and downs, but one of the most truthful and realest pieces of work to emerge from the Hi-Hop world in a while.

The Spill Magazine is a Toronto-based online publication dedicated to covering the independent music scene with a strong focus on our thriving hometown talent. Our writers bring you up-to-date news, in-depth features on musicians and reviews for the latest CD releases. We also travel to the front lines for all local festivals including Canadian Music Week and North by Northeast. Don’t forget to check out our Facebook and Twitter pages for all daily Spill updates.
RELATED ARTICLES
a$ap rockyalbum reviews
8.0

by Josh Whitworth on May 25, 2018
A$AP Rocky  TESTING A$AP Worldwide/Polo Grounds/RCA Records The third studio album by A$AP Rocky has officially been released under his own label A$AP Worldwide. The album is aptly named TESTING [...]
8.0

by Jonathan Hazlewood on April 6, 2018
Famous Dex Dex Meets Dexter 300 Entertainment Famous Dex, a well known Chicago rapper, has always been able to deliver fun filled music. Whether it be through multiple mixtapes and [...]
9.0