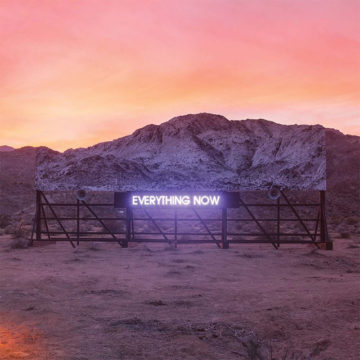 Arcade Fire is no stranger to theatrics when it comes time to release a new album. In 2013, before Reflektor (my favorite Arcade Fire album) was released, the band billed themselves as The Reflektors. They built a fake website with made up reviews, new costumes and came to us as the ultimate dance band. In today’s world of “infinite content,” Everything Now came to us with fidget spinners, a “fake news” website complete with a satirical album review, and a tongue-in-cheek dress code for their album launch show, that left a bad taste in everyone’s mouth.

I almost lament at how much I loved Reflektor while listening to this latest offering from a band that once was — and still has the potential to be —  great. But Everything Now isn’t a “latest and greatest” album. It comes off as the ironic victim of a society that has no more great music. “A terrible song on the radio, baby/What else is new?” laments Butler on “We Don’t Deserve Love,” but perhaps that comes a bit too close to the truth for many songs on this record.

A common theme throughout the disjointed Everything Now is blame, something we have already begun to gloss over when scrolling our social media feeds, because it’s just all so overdone. We get it. It’s everyone else’s fault – the web, the corporations, the man. But this is what we turn to music for, isn’t it? Instead of finding escape from the infinite feedback loop, Arcade Fire just reminds us that we’re all caught up in it, and seemingly incapable of finding true joy anymore. The mood doesn’t lighten as you go deeper into the album. You want to hope that the funky “Signs of Life” might be a good groove, until you’re reminded that we’re just “Looking for signs of life / Looking for signs every night / But there’s no signs of life.”

The best song on the album comes with an obvious nod to ABBA, “Put Your Money on Me.” It’s the closest a song on Everything Now comes to rekindling the dance party that we have looked forward to with Arcade Fire. They used to be the answer we sought from our fatigue with pop culture and over-saturated mainstream media, but Everything Now is sadly just contributing to it.

Lucy Rendler-Kaplan is a native Chicagoan, recently returning home after 10 years in Los Angeles. Having worked in field marketing for the past 17 years, Lucy recently left corporate America to work as a consultant. When not running, Lucy can most often be found out with her dog, watching an NFL game, or listening to live local music. Passionate about writing, Lucy enjoys writing about music in lieu of playing it.
RELATED ARTICLES
album reviewsarcade fireeverything now
8.0